A Tale of Two Progressives 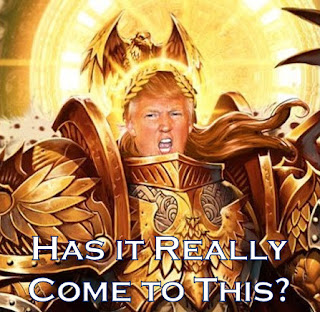 Okay, so then THAT happened.  And I'd be lying if I told you I was among those who saw this coming.

One of these camps is showing itself to be sadly predictable.  As boilerplate in its lack of self awareness as it is in what passes for its ideological content.  "I'm not shocked by any of this," began the tweet that the HuffPost described as a "Nightmare Election Night Summarized in 1 Bleak Tweet" - "People hate women for more than they hate racists."

Don't get me wrong.  I'm no fan of Trump.  I have grave reservations about his capacity to govern, given his glaring lack of political experience, among other numerous flaws and blemishes.  I do not condone his racial insensitivity nor his boorish attitude towards women.  But any kind of evil Hitler agenda will have to get through Congress first - which though in Republican hands, is so only by a margin, especially the senate.  And it's not like the G.O.P are solidly behind the Donald in any event.

HuffPost Canada did no better: "Hate and Fear Won!"  This saccharine article goes on to say, "When I think of my friends and family in the US, I genuinely fear for them. I fear for women, for minorities and people of colour. I fear for their professional and personal interactions, their reproductive rights and their right to basic safety and security. I fear for the legitimization of identity politics. I fear for climate change and the EPA."

So too has irony.  In a paragraph laden with identity politics - "I fear for women, for minorities and people of color", the author goes on to say that she fears for "the legitimization of identity politics."  Oblivious to the irony, apparently.  And this is the deeper problem with this narrative: its comical lack of self awareness.  Hate and fear - of the uneducated white male working class got us here.  The legitimization of identity politics - for the exclusive charmed circle of feminists, minorities and people of color - also got us here.

These articles are but two of a countless number cropping up everywhere online, including all of our Facebook news-feeds, since news of Trump's victory was announced.  Baskets and baskets full of deplorables turned loose on our streets.  Pepe the Frog on our computer screens!  Evil Hitler on the rise!

Can we really claim that racism drove so many to put Trump in office when the same electorate so recently handed a black man two terms in the Oval Office?  Was a vote for Trump really a vote against a woman president and for Trump's locker room boorishness?

Maybe.  I honestly hope not, but in some cases, people no doubt voted for Trump for the wrong reasons.  Or maybe it's an insult to all but a tiny handful of glaringly sociopathic voters to assume they had such dark motives.  Which is really part of the deeper problem.

Or maybe it was a vote against an obviously corrupt and Machiavellian DNC establishment candidate who willfully weaponized identity politics for use against Bernie Sander's basement dwelling supporters, and enjoyed considerable DNC favoritism in her race for the candidacy right from the get-go?

Or maybe it was a vote against Hillary's support of welfare reform while her hubby was in office?

Or maybe it was a vote against support for NAFTA, the TPP and other job killing trade deals?

Or maybe it was a vote against her hostility to union rights?

And this leads us into the second narrative to come from the other side of the defeated camp.  A narrative that is quieter and more introspective.  More level headed and frankly, more intelligent.

I won't go as far as to say that the Democrats completely brought this on themselves.  Okay, who am I kidding?  They brought this completely on themselves.  With a still popular outgoing two term president - a remarkable achievement - they've quite suddenly stooped to levels of lacking political acumen that we've not seen from them since the bad old days of Gary Hart and Michael Dukakis.  An even more remarkable political achievement.  This was a very, very winnable election for them, and they lost it to their own glaring lack of collective self awareness.

Two different narratives from two different progressive mindsets.  One wants to tell you what to think or else you're a racist and a muhsogynist.  The other wants to listen to you and take your fears and concerns, including of racism and misogyny, seriously.  One of these has a political future.  The other does not.